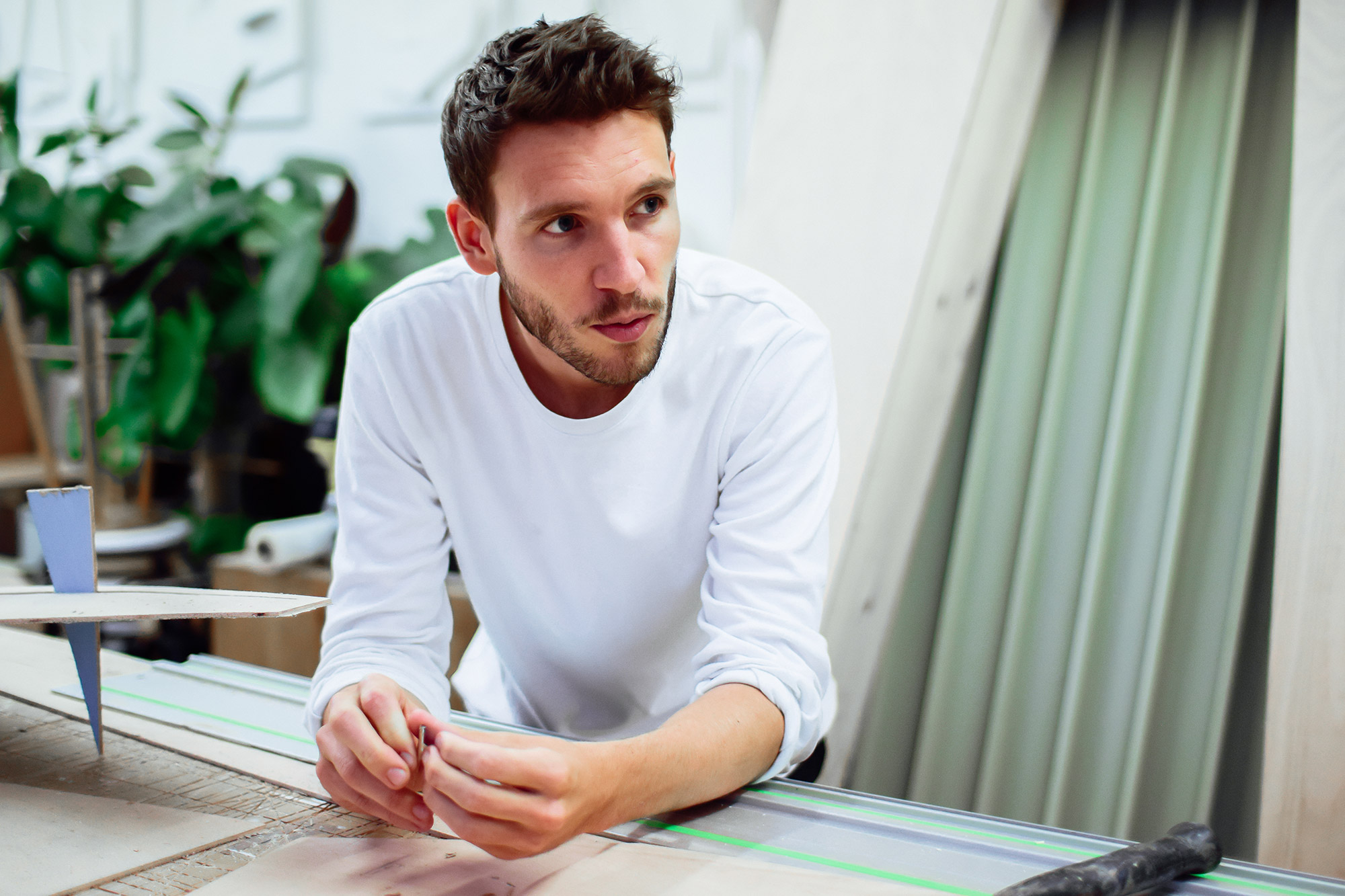 In an age where digital is king, one thing continues to remain firmly physical: the spaces we inhabit. Our surroundings both confine and define us; a fact that retail brands are all too aware of.

This is the domain of London-based set designer Robert Storey, whose characteristic spaces have rapidly earned him minor celebrity status within the fashion industry. After graduating from Central Saint Martins in 2008, Robert created Storey Studio, a self-initiated collective which he heads up as Creative Director. In just 6 years, the studio has clocked up an impressive roster of high profile collaborators, nailing it (literally) for brands including Nike, Kenzo and Louis Vuitton.

Even as we chat, Robert continues to make, his hands working almost independently from his head as he fuses offcuts of wood together. His urge to create is palpable.

We spent the afternoon with the well-spoken woodworker at his modest Dalston studio to hear more about his craft and London’s ever-evolving gay scene.

My childhood was spent in Berkshire, in the English countryside. Although my family weren’t super creative in a cultural sense, I grew up in an environment which really fostered craft and making. My Dad and Grandad were both amazing carpenters which, combined with my surroundings, really fed my creative appetite. I would spend a lot of time building treehouses or drawing in the garden. My Mum would often say ‘here’s some paper, see how well you can draw those plants for me’ which was great because I was really into it. My brother on the other hand was not. He would be out setting fire to things whilst I was sketching flowers.

I moved to London in 2004 to study Fine Art & Sculpture at Central Saint Martins. Whilst studying, I created a lot of installation and temporary art that often focussed more on the space the work existed in, rather than the sculpture itself. At the time I didn’t realise it but looking back, my interest in spatial design and architecture was always there.

On graduating, I decided I wanted to go and live in New York for a year. I made some friends over there who worked in fashion, one of whom was an agent. He represented a set designer called Janine Trott who was looking for an assistant at the time. Working with Janine was a great stepping stone into the industry. She’s very hands on and my skills really translated into her world.

When I returned to London in 2009, I started working for Shona Heath, a really huge set designer who does a lot of work with Tim Walker. I really loved it and quickly realised I wanted to be doing more spatial projects.

After that job, I began networking around East London, mainly through contacts I knew within the gay community. Gay bars such as The Joiners Arms and The George and Dragon were very prominent social spaces within the fashion industry back then. I made some great connections and started getting jobs based on the fact that I’d assisted some really big designers.

After another nine months of assisting, I realised I’d rather be working for myself so decided to set up my own studio. I was 23 years old.

Yeah, it’s really young. I was just like ‘fuck it, I’ll just do it.’ I didn’t need much money – I lived in a really cheap warehouse and worked in a cafe a few nights a week.

What role did gay bars like The Joiners Arms play in your career?

I hate putting a downer on East London and how it used to be so much better, but back then there was a really strong sense of community. I was hanging out with world-famous fashion designers like Richard Nicoll and Jonathan Saunders, photographers such as Matt Irwin and Ben Toms and stylists like Robbie Spencer. All those guys were my gay peers. We would go out and get drunk together. That’s one of the amazing things about being gay actually – there’s such a strong sense of belonging you feel, purely from a shared sexuality.

That’s one of the amazing things about being gay actually – there’s such a strong sense of belonging you feel, purely from a shared sexuality.

What do you think is causing this change to the gay scene?

Maybe the gay scene isn’t changing. Maybe I’m changing. Obviously London’s gay institutions are closing down but I’m sure there are many new places that are opening at the same time. Maybe it’s just targeted towards a younger demographic, one I’m no longer a part of.

I recently read an interesting article by Princess Julia in i-D about how London’s gay scene is being reborn. That happens in London – it goes through waves and reinvents itself constantly.

Since setting up your studio in 2009 you’ve worked with the likes of Nike, Diesel and Victoria Beckham. Would you say the work you produce has a set style or distinctive aesthetic?

Yeah I think so. As a studio, we’re always very focussed on creating things that feel like they came from us. There’s definitely a bold/graphic/architectural/sculptural amalgamation emerging with our aesthetic.

Everything I do, I try to do it the way I would do it, rather than taking reference from anyone else. Otherwise you’re simply a facilitator for someone else’s ideas. If you’re honest to yourself and your own style I think you naturally start to develop your own aesthetic which people recognise as you (and want to buy in to, hopefully!)

Have you seen a demand from brands wanting to move more into a digital space? How has that affected the physical aspect of your work?

Before social media, the only people who used to see my work were editors or people invited to an event I’d worked on. But now it doesn’t really matter who sees it on the day. Now it’s all about social media exposure. If you get a blogger going to a press day and sharing a photo of your work with 130,000 viewers, that’s better than any spread in Vogue. Because of this, brands are now calling upon designers who create visually exciting spaces. Whenever we start a new project, clients will always say to me, “I need it to be Instagrammable.” I hear it all the time!

That’s really interesting how brands are coming to you to create an exciting physical space yet also wanting it to exist within a digital realm. How do you feel about the temporary nature of set design?

I love and hate it in equal measure. I hate the waste it causes. We try to recycle everything we do but at the end of the day we’re still building something that won’t last forever and therefore there’s bound to be wastage. I still have a bit of an issue with that but at the same time I have to let it go.

On the other hand, I love the fact that we can make a structure that may exist for 5 days and which may only be seen by 500 people. The temporary nature of the work enables us to do things cheaper and faster, which is great because I get bored really easily. I always knew I didn’t want to be an architect purely for this reason – the thought of sitting at a desk for 3 years designing a single staircase would drive me insane.

Where do you seek inspiration for your work and how do you remain inspired?

I find inspiration in the everyday. The brickwork in an alleyway, the tarpaulin on a construction site. Everything is absorbed via osmosis.

I find inspiration in the everyday. The brickwork in an alleyway, the tarpaulin on a construction site. Everything is absorbed via osmosis.

How long have you lived in Dalston, East London?

I’ve been in Dalston for 4 years now. I previously lived in Homerton and before that, in Shoreditch. But the older I get the more I aspire to live in West London or Hampstead Village just because it’s so fucking idyllic! In reality though I don’t think I could leave East London. I thrive off its energy and diversity.

Are there any other cities you’d like to live or work in?

Yeah, I’m desperate to move all the time! In fact, one of the main drivers for starting my own studio was to enable me to apply for an artist’s visa so I could return to New York. That was my goal. Eventually I got one, but it was at that moment I decided that actually I quite enjoyed living in London!

I would definitely love to move abroad at some point – maybe LA or Barcelona or even Stockholm. I’m sure I won’t be in London forever. I find the idea of staying in one place forever quite depressing. I would never want to do that. My boyfriend’s from Cyprus so moving there is always on the cards.

Where are some of your favourite places in London?

The Barbican – I love it. It’s a utopian dream. I love the architecture. I love its location. I love that it has a massive conservatory.

When I walk down the streets of London I often find myself smiling a lot. I’m always happy to be surrounded by so many people and love watching them doing their thing. They’ve all come here to seek something out, whether it’s for money or for love or whatever. It’s a massive melting pot full of people just doing.

It really is. I think it’s good to remind yourself of that every now and again.

Definitely. It’s so easy to put the city down ‘It’s always raining; it sucks; people are getting stabbed; it’s noisy; it’s dirty and the rent is really expensive…’ But oh my god, it’s fucking amazing! The energy of the city is uncomparable to anything. I love it.

What’s next for Storey Studio? Have you go a dream project you would love to work on?

I love thinking about this. I’m a really big fan of manifesting – thinking about things you want to happen and saying them out loud. I’m quite spiritual in that sense. I really believe that if you think about something enough, it will definitely happen. So many projects I’ve manifested in the past have come true! I always wanted to work for Nike and I did. I used to say how I wanted to work for Hermes and now I’m doing a big Hermes project.

I would love for a really big furniture manufacturer to invite me to do a collaboration with them in the future. Some kind of lighting project maybe? I’m not quite sure who it is or what I want it to be, so I can’t say it out loud yet. 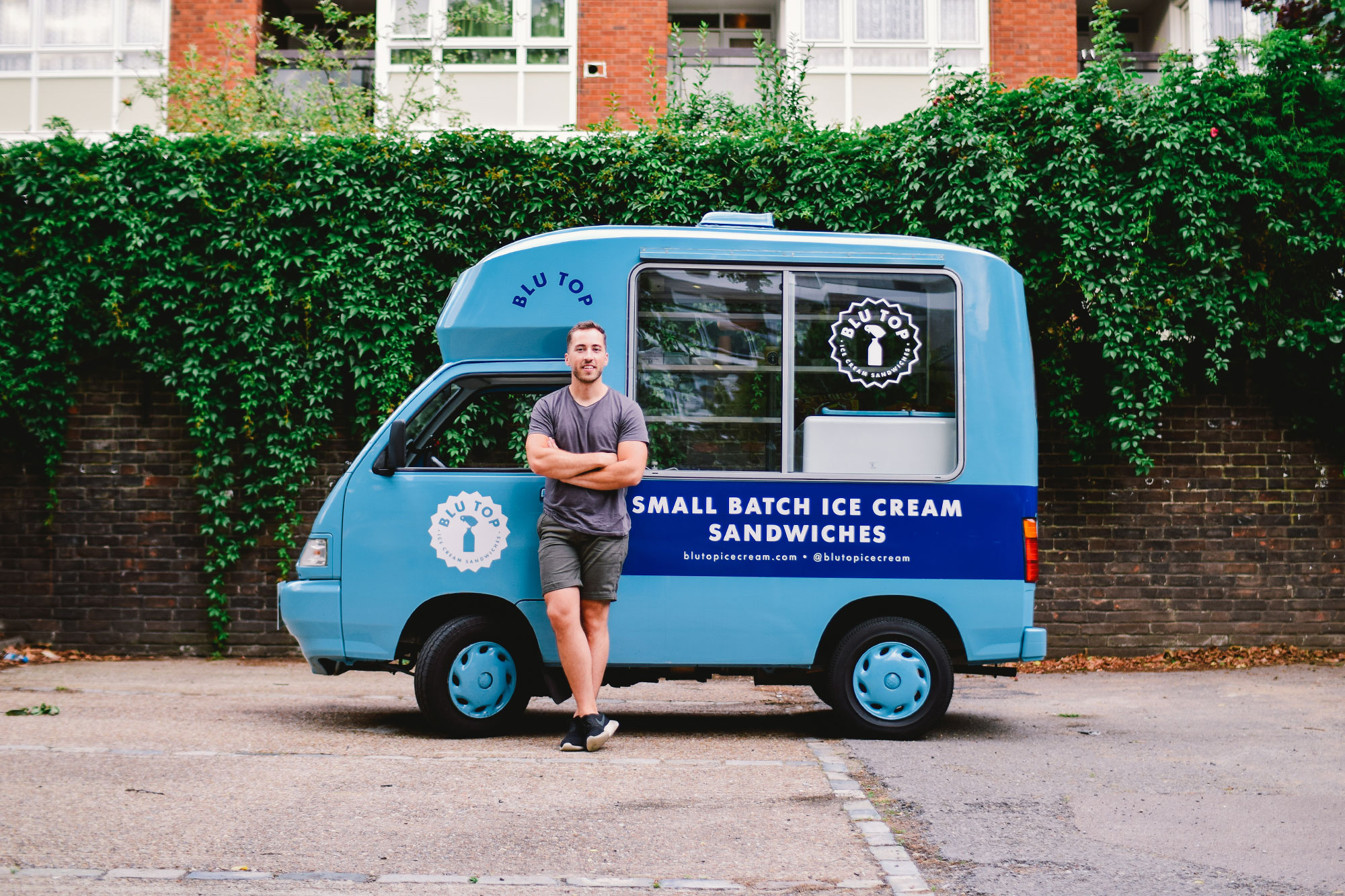