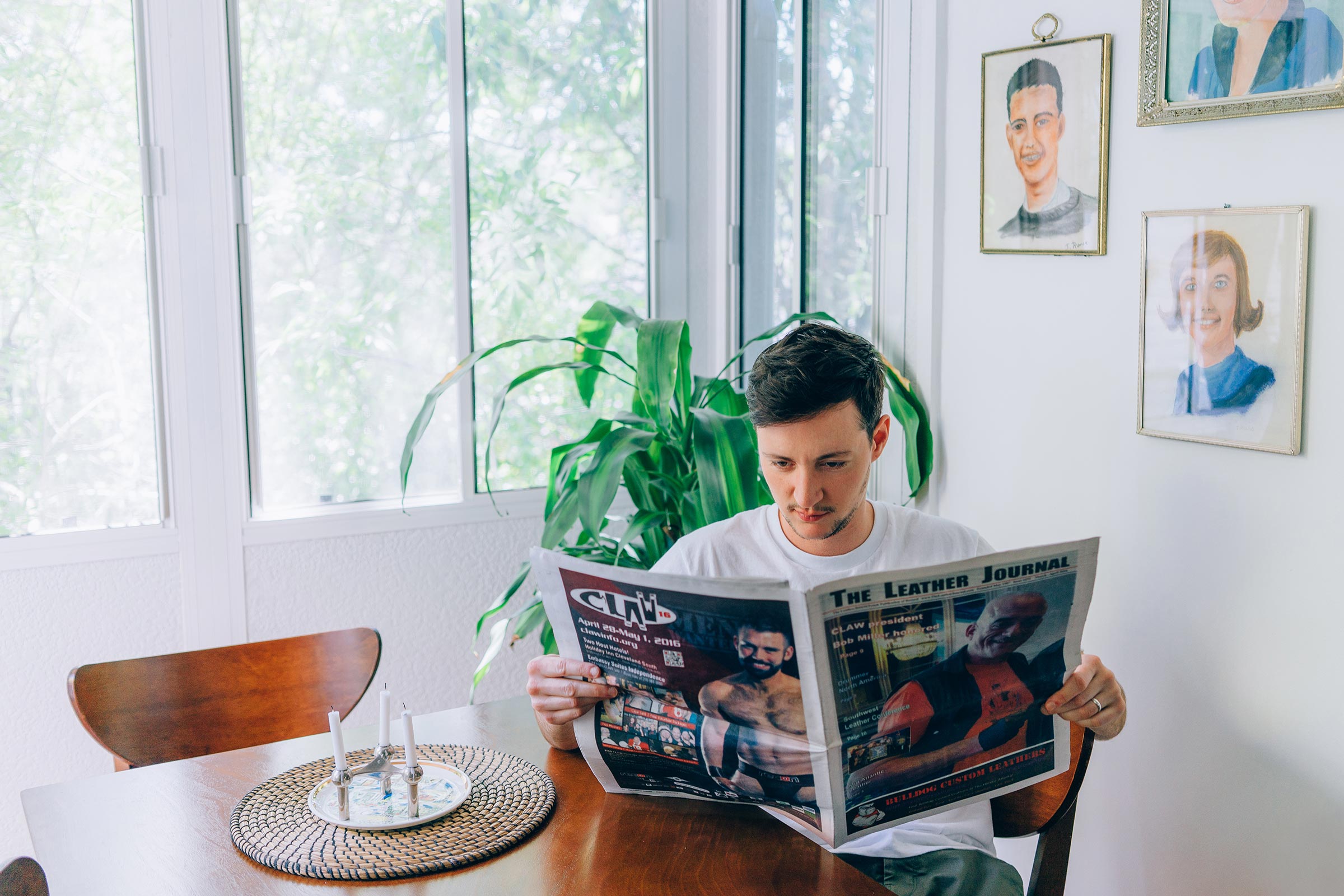 Few people can say that they are shaping how society views a culture. Rhys Ernst however is doing just that. The filmmaker and artist creates work reflective of his own experience as a trans male, from co-producing Amazon’s massively successful and award-winning TV series Transparent to collaborative artworks exhibited at The Whitney in New York. He’s helping to create the contemporary narrative of what it’s like to be transgender.

Rhys lives on the far edge of Silver Lake and Echo Park – where Los Angeles turns into the more alternative Eastside – together with his boyfriend and their cat, Miss Platinum. We stopped by his duplex apartment on a sunny afternoon to talk with him about his LA lifestyle.

How long have you lived in this space?

I moved to this apartment in May last year. Before that, I was living in a house in Sunset Junction for about five and a half years, which I was subletting from an American queer performance artist named Ron Athey. He had moved to the UK for six years so I lived in his place whilst he was away. The house itself has a lot of gay history to it – some scenes from the 90’s movie Hustler White were shot there. I even found some of the work from Vaginal Davis in the garage! Boy, if those walls could talk…

Wow, that’s amazing. How long have you lived in Los Angeles?

I moved to LA in the Fall of 2008, to study an MFA in Film & Video at CalArts. When I first moved to the city, I sublet a place with my friend Wu Tsang before moving into Ron’s house in Sunset Junction with my then partner Zackary Drucker. At the time, we were both transitioning in opposite directions – me to male and Zackary to female. We documented our lives through the collaborative photography project we called Relationship, which went on to be featured in the 2014 Whitney Biennale.

I probably would have stayed in that place if Ron hadn’t moved back from the UK to be honest. But my current boyfriend, Patrick, and I had been dating for over a year at that point, so we decided it was time to look for a place together.

How would you describe the Los Angeles LGBT community?

Silver Lake is the birthplace of the modern gay liberation movement in many ways; the Mattachine Society was formed here in 1950. It used to be littered with gay sex clubs and leather bars. Nowadays the feel is a little more “moms and school kids,” and sadly it’s getting more gentrified everyday.

There’s a queer store and community space in Los Feliz called Otherwild, which I love. The Tom of Finland Foundation in Echo Park is also an amazing place. That’s where my boyfriend and I met – he was doing an artist residency there and I was attending a party. That place is an amazing time machine-look into Echo Park’s queer yesteryear.

Tell us more about your work on Transparent.

I met Jill Soloway, the show’s creator, at Sundance in 2012 when we both had short films in the festival. She had just begun to direct, having come from a background of writing and producing for TV. This was around the same time her parent came out as trans. We kept in touch, and two years later, she reached out to discuss a collaboration on the pilot episode, which at the time was just a script.

My involvement each season involves giving notes on each script draft, casting queer and trans actors and extras, hiring trans people for the crew, being on set and giving performance and story notes. I’m also heavily involved with the post-production process and press issues. I think of it as a combination of creative producing and shepherding the politics of representation.

I also created the opening title sequence. Each season I update it using a combination of archival and original footage to create a visual history not only of the show, but of a queer past. I’m working on the sequence for season 3 now.

Your work is very much intertwined in the trans/queer experience. Do you feel that this element will always be a part of your work? Will there always be a queer storytelling aspect?

I feel a deep interest in this subject because of how limited and one-dimensional so much of queer storytelling has always been. I started making films fourteen years ago. Even in the gay film festival circuit in the nineties, there was some amazing stuff being made but also a lot of total B movies: movies made purely to show two guys kissing… and that was from within the queer community!

For trans representation, we’re practically starting at the very beginning. I’m super excited to contribute to its development in my own work and help other trans people get into the industry – something I’ve been doing as much as possible with my work on Transparent. Trans storytellers and filmmakers need a lot more access and opportunities. It’s going to be a long game because many are starting from nothing – it takes time to find your voice, to work your way up and build your craft.

For me, I sometimes wonder if being a trans filmmaker will limit my career options in the future, but I don’t know. I guess you can apply the same concerns to a black filmmaker or a gay filmmaker or a woman filmmaker: all of those perspectives are important and intrinsic in their own ways and shouldn’t be thought of as a specialty.

For trans representation, we’re practically starting at the very beginning.

That’s true. A lot of people often don’t question their gender at all.

Definitely. I was recently at a screening of a film called Fish Tank directed by Andrea Arnold, who has also directed an episode of Transparent. There’s a real subjectivity in the filmmaking and camera language, created from the perspective of the female gaze. For me, looking at gender comes back to feminism: it’s all mixed together. Looking at relationships through that lens will always be kind of queer to me, even if the characters are not.

Do you feel that this space and how you live is reflective of your identity as a creative and as a trans/queer individual?

Yeah totally. I feel like my house reflects the point that my life is at. I’ve established my roots and feel like I now have a home that’s both mine and Patrick’s.

In terms of my identity, I don’t know… I have this poster from a barbershop detailing all the fade techniques. It shows the dumpiest men ever which I think is really funny. I love to think about the construction of masculinity and how it’s presumed to be a neutral or a natural state. I couldn’t disagree more though – masculinity is a total performance.

As an artist, I love working from home and my home office reflects my working methodology. I don’t ever stop or start working though. I think it comes with the territory of being an artist: you don’t clock out. You are always on.

I’ve just finished creating a series of short films on trans history called We’ve Been Around, made in partnership with Focus Features. Each short is a mixed media portrait of a different trans pioneer – from a trans guy who fought in the Civil War to a trans woman of colour who ran a brothel during prohibition.

I’m also currently working on a feature film: a buddy comedy about two middle aged trans guys. It’s an examination of the daily minutiae of these two men, the construction of masculinity and their friendship. Imagine Tangerine but with dorky middle aged trans men! [laughs] I’m excited to tell that story and to collaborate with some of the folks I’ve met on Transparent and We’ve Been Around.

Season 3 of Transparent  is also underway – we’re almost done shooting. This season is going to be great. 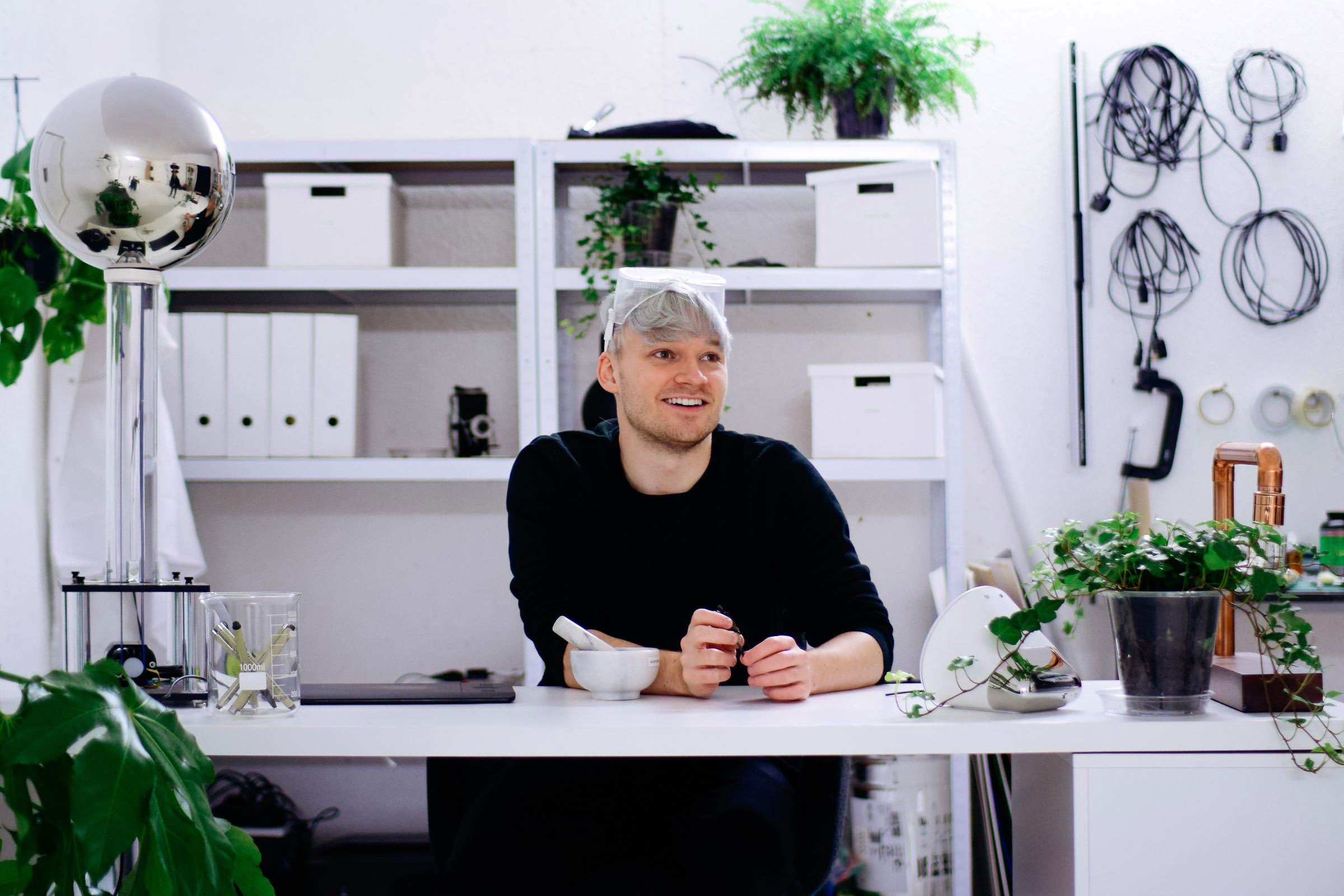