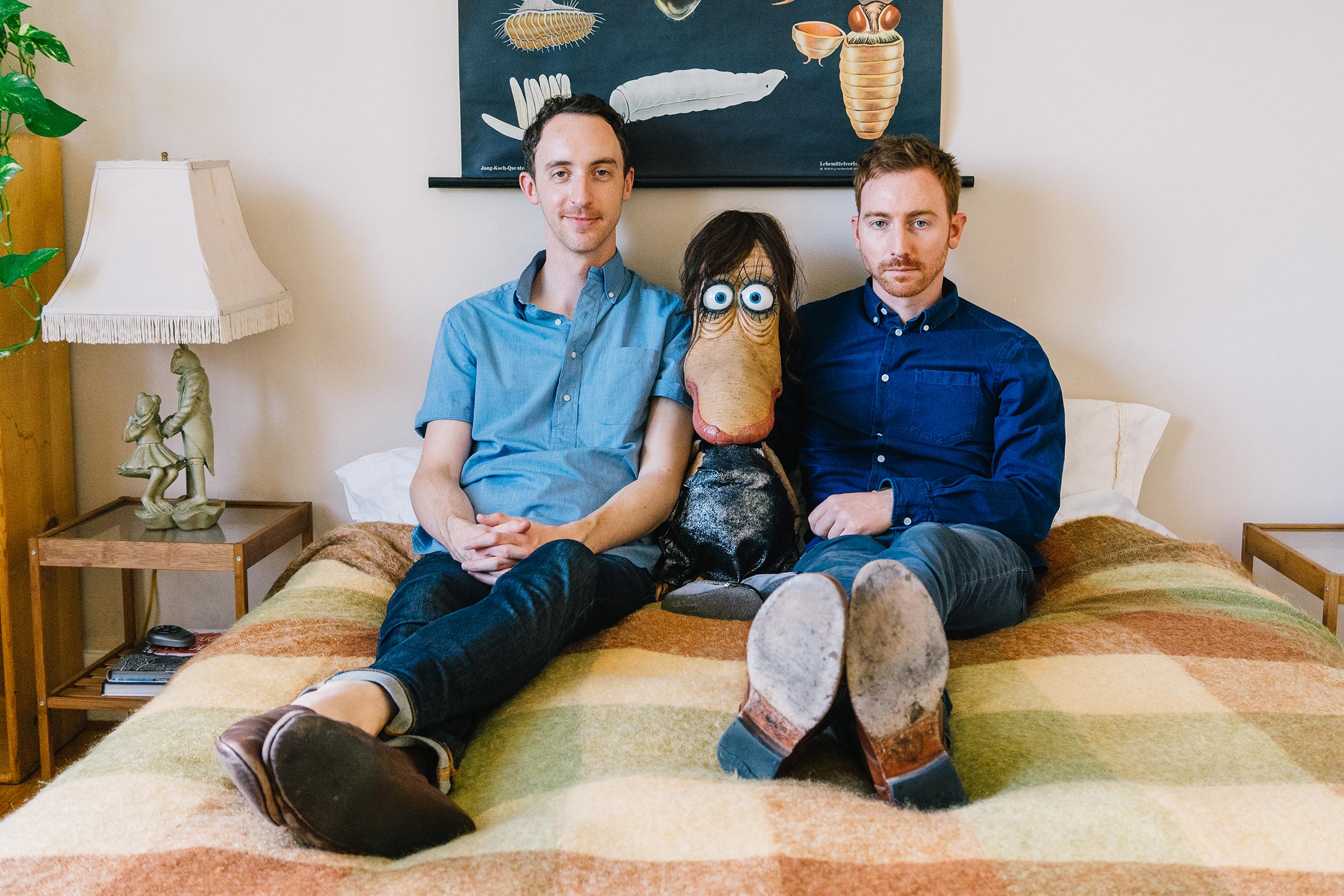 Los Angeles’ Los Feliz neighbourhood is like one giant treehouse. Its streets are surrounded by lush greenery, and flora and fauna run off from the adjacent Griffith Park. It’s sleepy and local yet unmistakingly cool – a perfect representation of the Californian dream.

Chris Turnham and Ian Samuels’ apartment is no different. While there’s no dedicated outdoor space, inside you feel entrenched in nature. Perhaps it’s the overall woodiness of the interior or Turnham’s calming illustration aesthetic. Whatever it is, you somehow feel tied to the land.

We sat down with the couple on a sunny afternoon to hear about their relationship with the city, and what it’s like to be two creatives living, and sometimes working, under the same roof.

How did you guys meet?

C: It does get more interesting though. I knew one of Ian’s best friends, Bill, through the L.A. art scene before I’d ever met Ian. It was only after we got together that we realised we had a mutual connection. Ian had even seen a print of mine in Bill’s house before we started dating.

I: But had no idea you were the man behind it!

How long have you guys lived together?

C: We moved into this place about two years ago. I have to admit that during the move, I was probably a bit overbearing. I think my style may have been somewhat forced upon Ian.

I: Most of my stuff is still in boxes in the garage! But I feel like our interior styles are very similar, so it’s all good. I did get to keep my toothbrush though…

C: [Laughs] You got that one thing.

What is it like being artists who occasionally both work from home? How do you maintain your individual creative pursuits under one roof?

C: We’re always asking each other for an opinion. I guess that’s one of the main benefits. Even when I get advice from others, I’ll always ask Ian what he thinks of my illustrations. And in return, I’ll help Ian out with any design he needs for his movies.

C: He doesn’t let me read his scripts but when it comes to content creation I’ll help him craft stuff for his Instagram, for example. Or the titles. I created the titles for his short film Myrna The Monster.

Can you tell us more about Myrna the Monster? Where did the idea for the movie come from?

Myrna is based on a true story in many ways, reflecting some of my own struggles when I first moved to LA. She faces the everyday choice to commit to her future and let go of her past, a feeling most 20-somethings going through the same transition in life can empathise with.

Four years ago, I was lucky enough to meet Brendan Kennedy, the Director of Development at MTV Other. We had a coffee on Main Street after my lobster romance Caterwaul screened at Slamdance. I shared a draft of the script and explained that this was a story about being in your twenties. I wanted to create a sincere portrait, shot in real locations across the city. Myrna had to be treated like an earnest soul.

After a few months of convincing – and my pre-emptive puppet build – we got the OK. I built a production team made up mostly of collaborators I met at CalArts, and worked with MTV Other to oversee the project.

In no time, Myrna was alive, wandering around Griffith Park, Dockwieler Beach, Koreatown, and Joshua Tree. Victor Yerrid (Puppeteer), Ben Kitchens (Director of Photography), and I worked closely to give the impression of naturalism but behind the scenes we were rolling on dollies and propped up on platforms, sometimes having five or more assistants controlling Myrna’s movements with fishing line and rods!

Do you see any overlap between your work and your sexuality?

C: For me, I feel like there’s something gay about the work I create, but it’s definitely not intentional. When I sell my artwork, a lot of my customers tend to be gay men, but I’ve no idea why.

I: It’s because you have good taste.

What about you, Ian?

Would you say that, in some way, Myrna is a queer character?

I: Yeah I guess so. Myrna’s funny because people see in her what they want; they’ll project their own experience onto hers. She’s an outsider, but she’s not overtly queer.

Another short film of mine, The Eyes And The Ice, features two lead gay characters, but that’s certainly not the main focus of the plot. It’s not a political movie in any way. It’s about a relationship.

C: You’ve never been out to make queer movies though, really. That’s not the point of view you want to express.

C: You mentioned it earlier: all of your characters are outsiders. That’s what it feels like to me. They’re not mainstream, they’re not the norm. Everybody can relate to that feeling on some level.

How has your hometown influenced your work, if at all?

C: For me it has for sure – all I seem to draw these days are the houses of LA. I was never inspired to do that when I lived in Portland or Seattle. The environment here is so visually inspiring to me, especially the architecture. There’s something about it that’s intriguing as an artist. I’ll often notice a beautiful building butting up against some weird, gross alley or another shitty house. There’s always such an interesting contrast.

I: Before you moved here, everything in your work seemed to focus on ‘creating’ a world. But here you’re actually drawing, verbatim, what you’re seeing.

C: Yeah totally. I see stuff here and it creates a fictional world within itself. You don’t have to imagine one. It’s right there, in front of you.

What about you, Ian? How has LA affected your movie making?

I: I feel the same way. The stuff that I’ve made since I’ve been here has all centred around LA. Myrna, The Eyes And The Ice – all of those movies were made here.

I: No, I shot that in Massachusetts. That’s not an LA story.

C: That one’s an outlier.

I: I grew up in Massachusetts, in the Northwest, where the landscape is much moodier. The weather, the history and the textures are all more extreme compared to LA. I think it’s actually more interesting to write about a weird character in LA because it can feel so out of place. In Massachusetts, if something falls out of the ocean, you kind of expect it to happen. LA has a different feeling – it’s more surprising somehow.

How would you describe the LA gay community?

C: Probably how everyone else would describe it: there’s the whole WeHo scene and then, on the other hand, there’s not. You kind of exist in one or the other. Even when you disregard the bars that define each tribe, the scene is still apparent. You have all these skinny, pasty dudes in one place and all the tan, buff dudes in another!

You have all these skinny, pasty dudes in one place and all the tan, buff dudes in another!

What’s next for you guys? Any upcoming projects that we should look out for?

I: Yeah, I’m writing a feature script for Myrna.

C: It’s really good. You have a web show you’re developing too, which you want to turn into a movie.

I: Yeah, we’ll see. I’m always a little skeptical about my work until it becomes a reality. For now, I’m just continuing to make work. 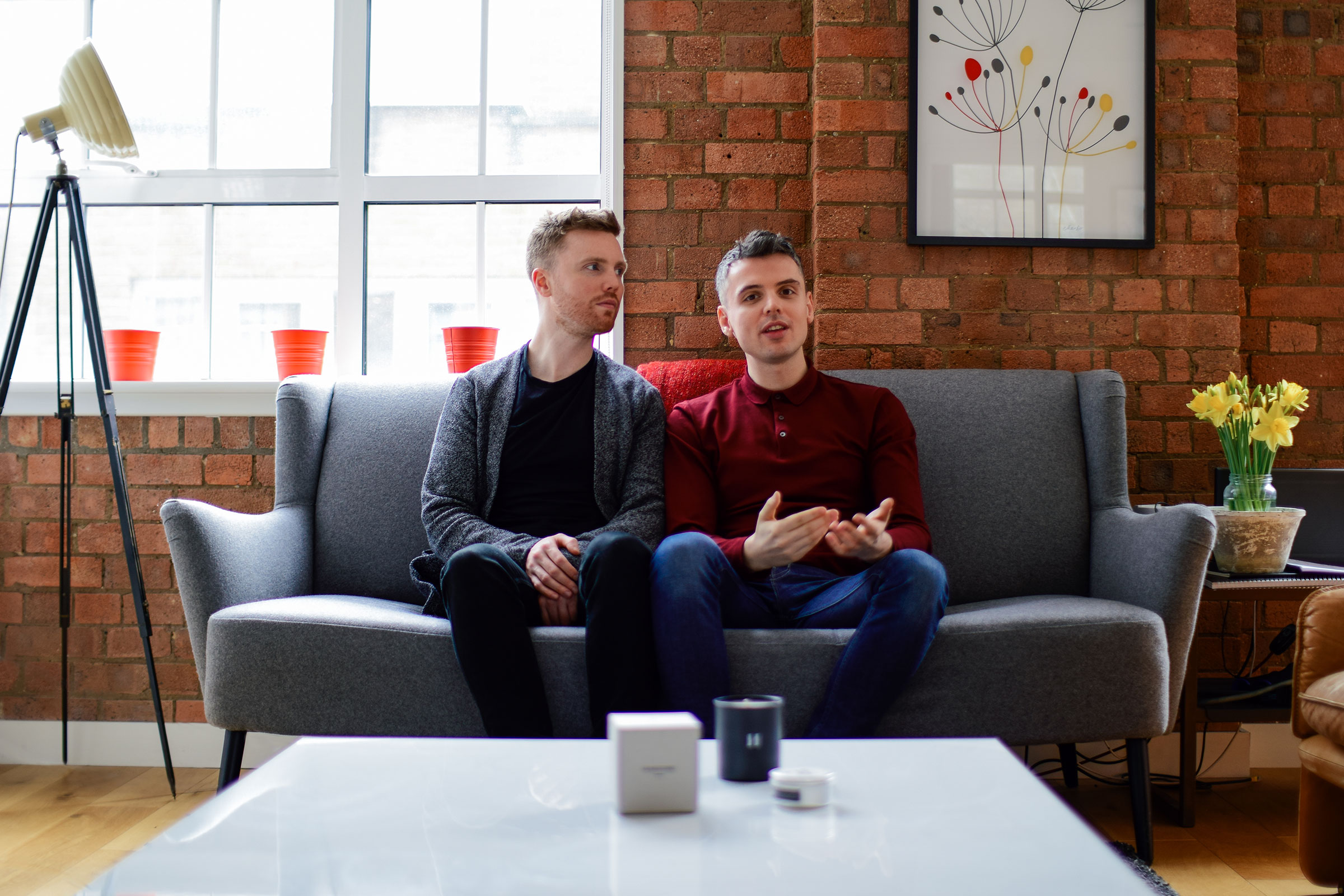