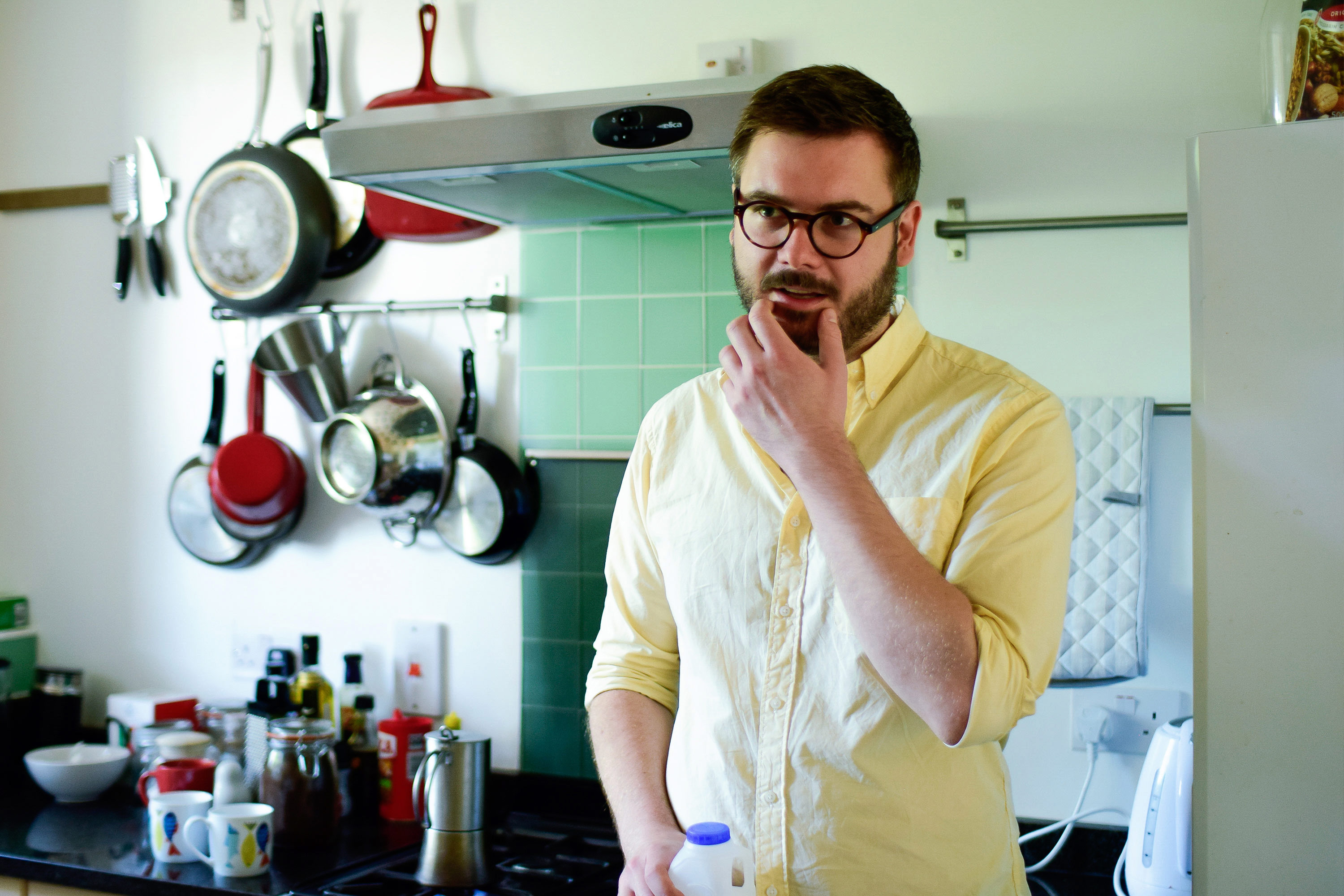 The baby-booming village of Brockley in London’s sleepy South East, isn’t generally known for its creative or cultural endeavours. This is the place you’d likely find yourself “settling down,” opting for a life of practical furniture and locally-produced sourdough.

But nestled at its heart, stands an imposing ex-council tower block, home to Norwegian-born animator Bjørn-Erik Aschim. A self-declared Disney fanboy, it was Bjørn's passion for drawing which brought him to the UK in 2010. Since moving, he’s landed jobs at some of the most prestigious animation studios around the country and received high praise for his BAFTA-nominated short, Everything I Can See From Here – the slightly sinister story of soccer meets sci-fi.

We caught up with the unassuming artist for an illustration masterclass, before joining him on a tour of his South London suburb.

I’m a filmmaker and animator from Norway. I live in London where I direct and animate short films and do a lot of design work for TV commercials. My background is in feature films and my first job after college was drawing backgrounds for a film called The Illusionist (2006). I spent three years working on that in Scotland and moved to Bristol to work for Aardman Animations in 2009.

After about a year in Bristol I blew all of my money on a 7 month trip around Asia and came back to London and signed up as a freelancer. I made some money and got a studio space. In my spare time I started working on a short film with my friend which eventually ended up being BAFTA nominated last year.

At the moment I‘m part of an animation collective called The Line and I’ve just finished my first big commercial directing job at a production company in Soho. I’m probably about to have my first substantial amount of time off in years.

One of our favourite animations of yours is Wallflowers. We’ve all been that guy once! How did the concept for that short come about?

The idea was born out of a brainstorming session with the guys in my collective. We’d just finished a film that took ages to do and we needed something short and punchy to keep people interested in our work. I presented a 10 second animation test to the guys with some characters I’d already drawn and everyone got the idea immediately. So we decided to make it. I’m not the most outgoing person in the world, and I think it came at a point where I’d been partying a lot and was a bit jaded of with the London nightlife.

The film is about being an outsider in an ultra social situation where you are supposed to have the best time of your life, but actually all you want is to curl up in bed.

I can never really tell exactly how these projects all come together. It’s usually a combination of different dead ends and accidental ideas and things that happen to you that suddenly connect in a new way. It took about half a year from start to finish, in between other projects, so it wasn’t exactly quick but I’m really happy with how it turned out. If you’re local to East London you’ll probably recognise some of the locations in the film as well.

Some of your more personal illustrations have an obvious homoerotic edge to them. What is it about these characters you particularly like?

I do these drawings to relax. I think my brain just reverts to some reptilian state where it just starts coming out with filth. Usually I get bored or horny and I do pages and pages of just really dirty stuff. It’s mostly horrible and embarrassing and really bad so I don’t show it to anyone. But every now and then there’s a little drawing that pops out. Something about a pose or an attitude or something I captured in the eye of a character. Then I expand upon it and re-draw it until I’m not embarrassed about it anymore and feel like I can show it to people.

I’d like to try to capture some kind of universality in the drawings. I feel like you shouldn’t necessarily be into men to appreciate them, that there is something more there than just wank material. There’s a challenge in making these slightly pornographic fetish types feel real. It’s a fine line between being suggestive and too explicit. I’d like to get right up to the point where it’s almost definitely smut but maybe not, maybe it’s something more.

It’s a fine line between being suggestive and too explicit. I’d like to get right up to the point where it’s almost definitely smut but maybe not, maybe it’s something more.

Tell us about your childhood home and your experience growing up there.

I grew up in the suburbs of Oslo, in a monolith apartment block, probably what you would call an ‘estate’ here in the UK. I was a loner in school, not so much bullied but just left alone most of the time. I used drawing as a coping mechanism I think, and it kept me occupied when everyone else was playing football or doing something active outside. I’d sometimes sneak home at lunch to watch films. Disney musicals became a real escape for me, being a young gay closeted guy. All these characters who were trapped but singing about escaping and finding a better life somewhere else. It’s so over-the-top but it just hit home with me at the time. I couldn’t believe it was all done with drawings and there was this new technology called 3D that was happening. I honestly couldn’t grasp why nobody else around me was into it – nobody gave a shit. It was so exciting to me! I needed to get away from where I was and do animation. I made that decision pretty early on.

How long have you lived in London? Why did you chose to settle in the neighbourhood of Brockley?

When I first moved to London in 2011, I lived in Hackney and spent most of my first few years there. I love Hackney but it changes so fast and I’m not sure it’s for the better. I’ve only recently moved to Brockley, about 3 months ago. It’s very sleepy here and very different. East London left me spoilt for choice. I’m not used to all the shops closing so early and I miss the easy access to all the fun!

I used to live in a house share with 6 other people and it just became exhausting after a while, especially when work got busy. Being single, I do feel a bit far away from all the action now and the commute has become a real slog but there’s some nice stuff happening around here. A lot of my friends live around here now too. We’ll see. The pace is definitely different.

What are some of your favourite places to go in London to be creatively inspired?

I don’t know if I go anywhere specifically to be creatively inspired. Inspiration just kind of comes on it’s own terms, wherever you are, when you least expect it. You just have to be ready for it. I think it usually happens whenever I’m either in a really crowded place, or when I’m on my own. So mainly the tube or when I’m taking a shower. Maybe sometimes when I’m swimming. There’s some good pools in London. I just discovered Crystal Palace sports centre with it’s crazy architecture. The park is like some kind of ancient archeological dig with the Crystal Palace ruins and the concrete dinosaurs.

I’ve also started taking the train to London Bridge and walking from there into work in the morning. It’s like an hour long walk into Soho over the river. It blows my mind every time I walk across the Thames, I’m always like “oh yeah, fuck, I live in London”.

The Barbican is also one of my favourite places. It kind of reminds me of the suburb where I grew up in Oslo, the same kind of utopian, concrete architecture. But this place is actually functioning as a proper living space and a cultural hub. It’s such a contrast from the tower block I grew up in.

Are you a part of any local or global communities?

Not really. I’m on Scruff? But I always open it right before bed when I’m exhausted and not able to communicate with anyone properly. I probably should ‘get with the gays’ a bit more but I’m always so busy working!

How do you view the gay communities in London and how much of an affiliation do you feel with them?

I pretty much feel like a complete outsider. Because I’m working so damn much I never really feel like I’ve got any time to really be part of any community. I tend to jump into these long projects which often means I’m out of action for months on end. When I finish, I crawl out into the light and find that things have changed or people have moved on and I have to sort of find my feet and start over again. It’s kind of a bad cycle, it needs to change. How does everyone do it?

How do you think gay culture in London has changed since living here?

I don’t really know if I know what ‘gay culture’ in London is. I’ve only been here for 5 years. It’s definitely becoming a lot harder and expensive to live here for sure. And a lot more exhausting to do all the things that everyone used to do. Just purely on a geographical level, people are moving further away from each other and live in completely different parts of London now. There doesn’t seem to be any obvious ‘gay neighbourhood’ these days and going out definitely seemed a lot more fun three years ago. I don’t know if it’s a result of me growing older or if the city is actually changing. Maybe a bit of both?

What are your future aspirations?

Getting a decent work/life balance. Now I have some time off, I’m going to reconnect a little with the city.

I’ve got more projects I want to do too. I’m writing a feature film script and I need to get back into drawing again. But my main project is to figure out how to do these things without sacrificing all of my social life. I just came out of a directing job where everyone constantly needed to know what I wanted. I almost want someone else to decide for me right now. For a little bit, anyway. 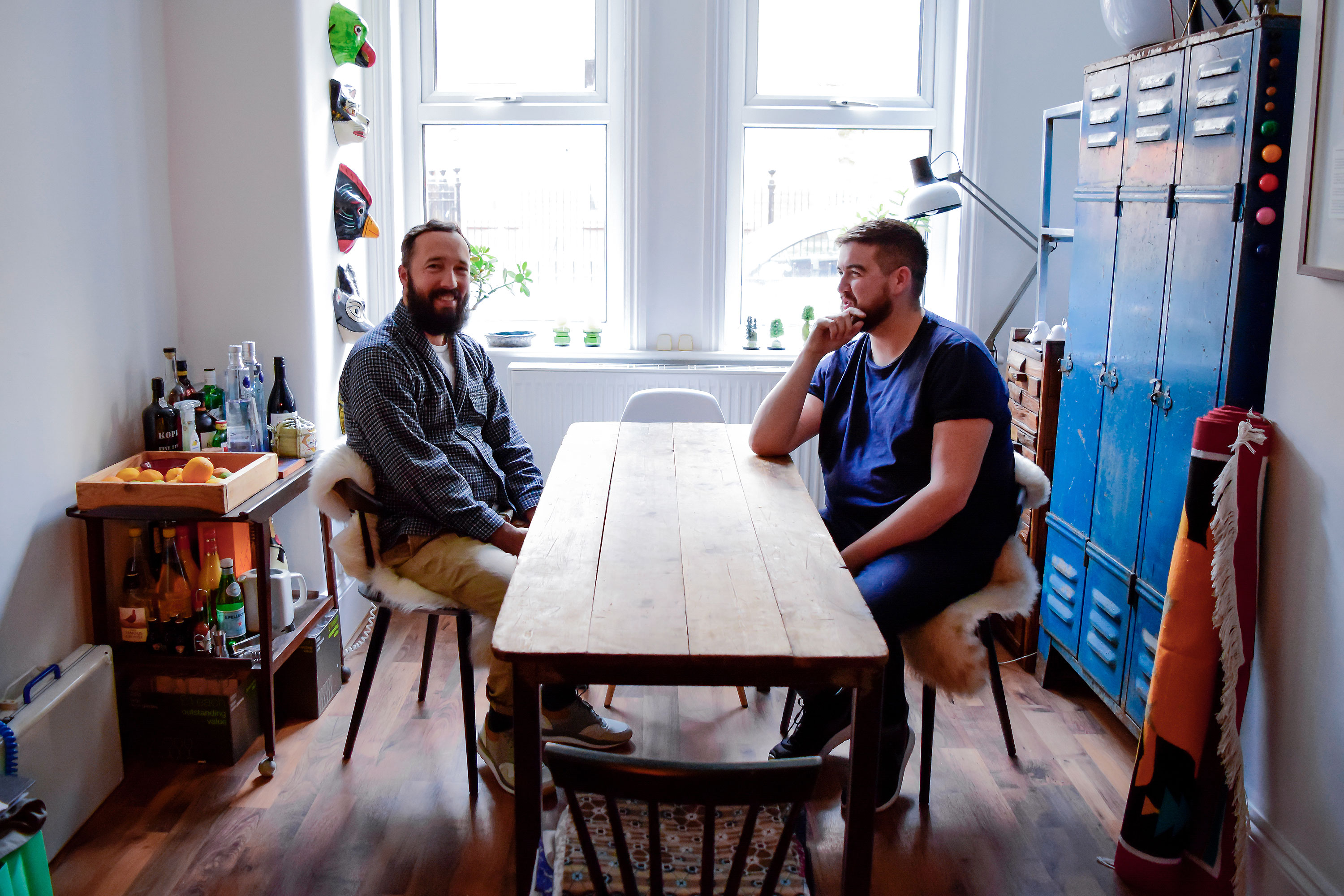