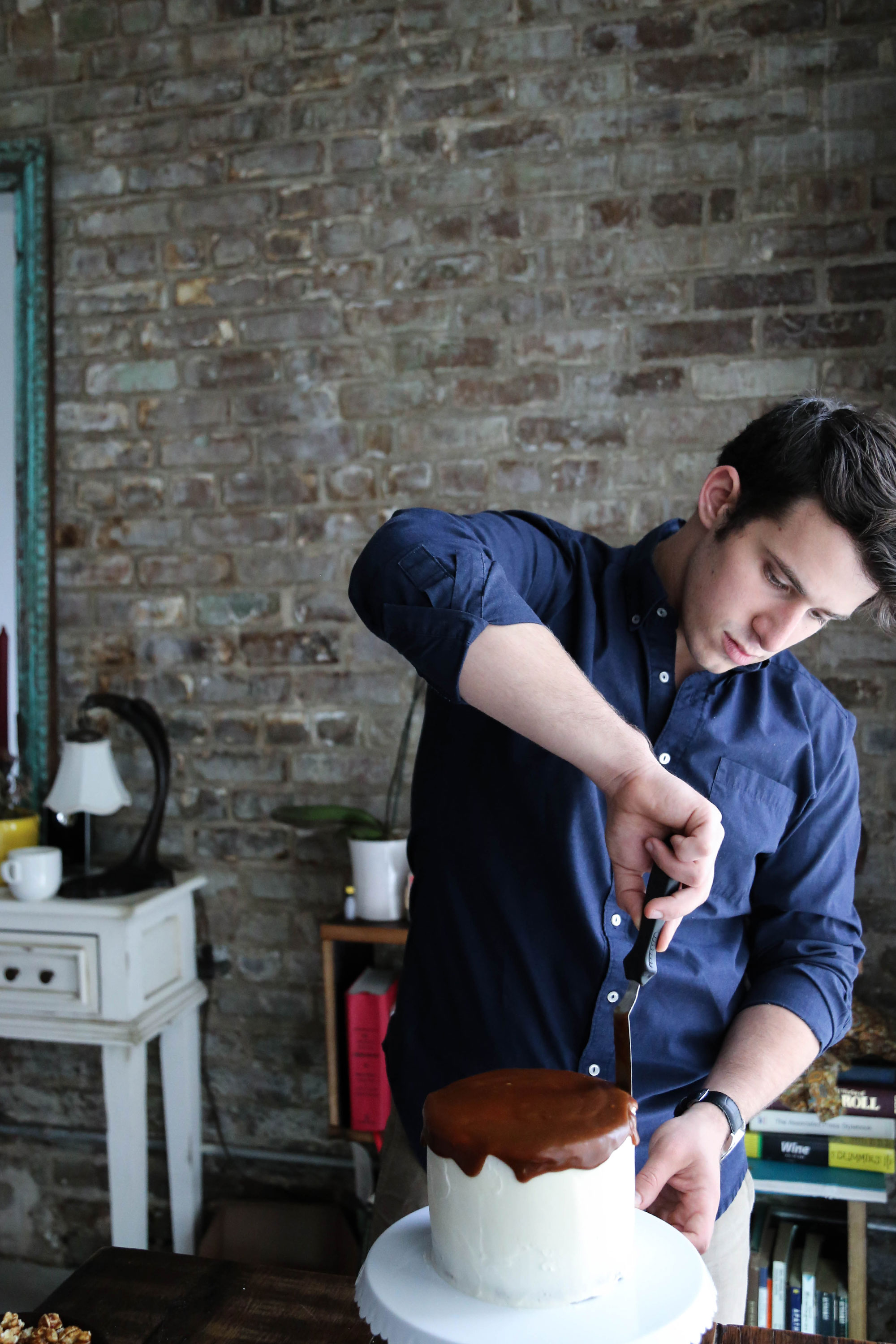 Where sugar content is concerned, Beau Ciolino takes no mercy. He’s the guy responsible for this beautiful monstrosity (diabetics, look away now). He’s also the recipe whiz behind Probably This, a drool-worthy food blog run with his boyfriend Matt, dedicated to their kitchen creations.

We first discovered Beau after his cocktail collaboration with the Yummertime boys last year, and have since been hooked on his honest, smart and downright hilarious writing. Chatting with the New Orleans native, it’s instantly clear that the blog is most definitely the voice of Beau – his slight Southern drawl and punchy comebacks both familiar and comforting.

We caught up with the 22-year old baker to find out more about New Orleans’ resilient food heritage, growing up gay in the Deep South and how he’s bringing the feed back to Instagram.

Tell us a bit about your background and how your blog, Probably This, came about.

I’ve always been a baker and a cook. My hometown of New Orleans is considered a big food capital in the US, plus I have an Italian family. Both of these things collided to create a rich food culture for me growing up.

As a kid I was never really interested in sports. I used to do it once a week purely to appease my parents. The rest of my free time was spent watching The Food Network, especially any show featuring Emeril Lagasse, a local chef who was, and still is, internationally recognised. Knowing he lived in my city and was also on my TV was really cool as a kid. It was him that inspired me to want to do more with my food than just have it sit in a kitchen.

As I grew older, I realised I had learned a lot of skills over a decade and a half, so I started to create recipes that interested me, experimenting with things I hadn’t tried before. Just as I was about to finish college it was clear to me that I had little interest in what I was studying and wasn’t being creative enough in my own passion. It was depressing and annoying and made me unhappy, so I looked at showcasing my baking and photography as a creative outlet.

I launched my blog, Probably Baking (since renamed to Probably This), in 2014 as a way of sharing these recipes with a like-minded community. At the time, I didn’t have any friends who baked or blogged so I was keen to connect with other creative individuals who would say, “Yeah, you put that weird ingredient into that cake!”

In terms of my style of blogging and why it’s so off-kilter at times, it’s because growing up I found a lot of cooking shows and food blogs to be boring and somewhat pandering at times. I’m not a 30-something mom with a family, living in the country. There’s a lot of blogs like that out there and they’re great, but they weren’t necessarily made for me.

Do you see the blog purely as a side project or is it something you’d like to turn into a full-time career?

I struggle with that question on a daily basis. I don’t have a job lined up after college and to be honest, I don’t necessarily want one. For any creative person, the idea of making things as a full-time career is always tempting. I’d love to make money from blogging just so I could blog constantly and spend all my time doing it. That’s the biggest thing for me. It’s not that I really wanna make money off a goddamn cupcake recipe, I just want to be able to do more of it.

How is your boyfriend Matt involved with Probably This?

He’s a constant source of inspiration for me and has recently become a co-blogger on the site, creating and writing cocktail recipes, as well as handling a lot of the creative direction. I’ll often discuss recipes or web layouts with him or we’ll go over selected images from a photoshoot together. He’s really good at saying “no you’re delusional, this is awful” or “wow, this is great!” He’s awesome.

I’m not a 30-something mom with a family, living in the country. There’s a lot of blogs like that out there and they’re great, but they weren’t necessarily made for me.

Tell us more about New Orleans. Were you born and bred there?

I was. I’m currently living with my boyfriend Matt in the Bywater. It’s a new up-and-coming neighbourhood, not far from the French Quarter, the historical home of New Orleans’ gay community. It’s pretty hipster, similar to Brooklyn which can be annoying at times. But I love being so close to everything that’s going on in the city. It really is a beautiful area.

What are some of your favourite places to visit in Bywater?

Essentially everything here is totally new. When Hurricane Katrina hit Louisiana in 2005, the Bywater area was really heavily affected. A lot of the businesses and restaurants here have been built or rebuilt in the last 5-8 years by the huge number of young people that moved in.

One of my all-time favourite restaurants is Sneaky Pickle. I know, it’s a ridiculous name! Somewhere in the bathroom it says ‘You’re a Sneaky Pickle.’ Whenever I see it I just start laughing – I don’t know why! They do mainly vegan and vegetarian food for super cheap prices and everything is locally sourced from many of the urban farms that sprung up after Katrina.

We also have a great pizza joint, famous in our area, called Pizza Delicious. We’re not known for our pizza here in New Orleans, it’s not our thing. Pizza is for Chicago and New York, but not here.

The last one I can think of is Oxalis on Dauphine St. They specialise in whiskey and have a great patio. They also do a burger that comes with bone marrow on top. It’s the most decadent thing ever, if a little gross.

What foods are New Orleans famous for?

Typically when you think of Southern food you think chicken, biscuits and a lot of fried stuff. The same can be said for New Orleans but being a port city we’ve also been heavily influenced by African and European cuisines. A popular dish is red beans smothered over rice, often served with ham hock and cornbread – it’s considered a Monday special here.

We’re also particularly proud of our seafood. After the BP oil spill in 2010, much of our seafood population was totally decimated, destroying a lot of local fisheries and livelihoods in the process. Since the clean up, there’s been a resurgence of interest in our seafood and now it’s safe to eat again. New Orleans natives will always tell you to eat Gulf Shrimp!

And Hubig’s Pies right? We loved your recipe for this New Orleans staple.

That was actually my first piece of press I’d got from the blog. Hubig’s are these little hand fried pies – super unhealthy but the BEST THING EVER. Hubig’s Pie Company was a staple of old New Orleans, having been here for nearly 100 years. You could go into any grocery store or gas station and get these little pies for 99c. They had 8 different flavours and were a huge local legend.

Then one day, in 2012, the factory tragically burnt down. It was awful. The whole city freaked out. It was the craziest city-wide drama. Everyone was gossiping about where Hubig’s would reopen but due to an insane licensing problem, it never happened.

A few months ago, my friend texted me one morning simply reading, “make a fucking Hubig’s Pie. Period.” And within a week I’d figured out what I wanted to do for it and made it. I altered one of the pies to be savoury rather than sweet and filled it with Vietnamese Pho. In New Orleans we have a massive Vietnamese population. We had a huge influx after the Vietnam War which has led to at least 15-20 great Vietnamese restaurants in the city, all of them phenomenal. I decided I wanted to mix a piece of old New Orleans with a new culinary trademark of the city.

It hasn’t always been on my mind. If anything it’s been quite the opposite. I’ve never wanted to leave just for the hell of it. I have a lot of friends who’ve left purely to experience something new. I always said I would only move away for a purpose.

I still see a huge infatuation with living in NYC but I have to admit, I don’t feel that. It’s going to take a good job or a good offer to get me over there. Plus I’d need to be emotionally stable!

Tell us about the gay community in New Orleans.

It’s really varied here actually. I wouldn’t say there is one specific gay community. We’ve got the downtown dance clubs which were great fun in high school but there’s also a really great arts community that has a lot of gay, queer and transgender people making awesome creative work. I don’t think there’s anything wrong with the stereotypical notion of gay communities in a city but I do feel there needs to be room for more creative and innovative young gay people, with a variety of interests.

Is this a viewpoint you think is becoming more common amongst gay people in New Orleans?

The recent gentrification of the city has seen a lot of people move to the area from Brooklyn and California, bringing with them a newer, more diverse outlook. It’s definitely something that’s becoming more prevalent but New Orleans is constantly changing so it’s hard to keep up.

Do you think people your age are looking for something different to what was here before?

I think so. Whether they’re actively seeking something different or just desiring to create more, I’m not sure. But we’re definitely living in a really cool era. Young gay people today want a little bit more than what was here previously.

Are there any people or brands who you feel share your views on sexuality?

Hmm, that’s a tough one. The only one I can think of is Hello Mr. I only discovered Hello Mr recently actually, at issue 4 I think. I was intrigued because they’d chosen an African American model on the cover. The unfortunate thing about the gay community is that often we tend to idolise the white, buff, masculine guy which is obviously very damaging. I’ve got the privilege of being a white male, who can be masculine if I choose to be, but I definitely don’t think that’s safe to be the stereotype of the entire community.

What are your aspirations for the future?

I just want to make sure that everything I do is as authentic as possible, both personally and professionally. In our current world we’re inundated with fake shit. I don’t want to contribute to that. 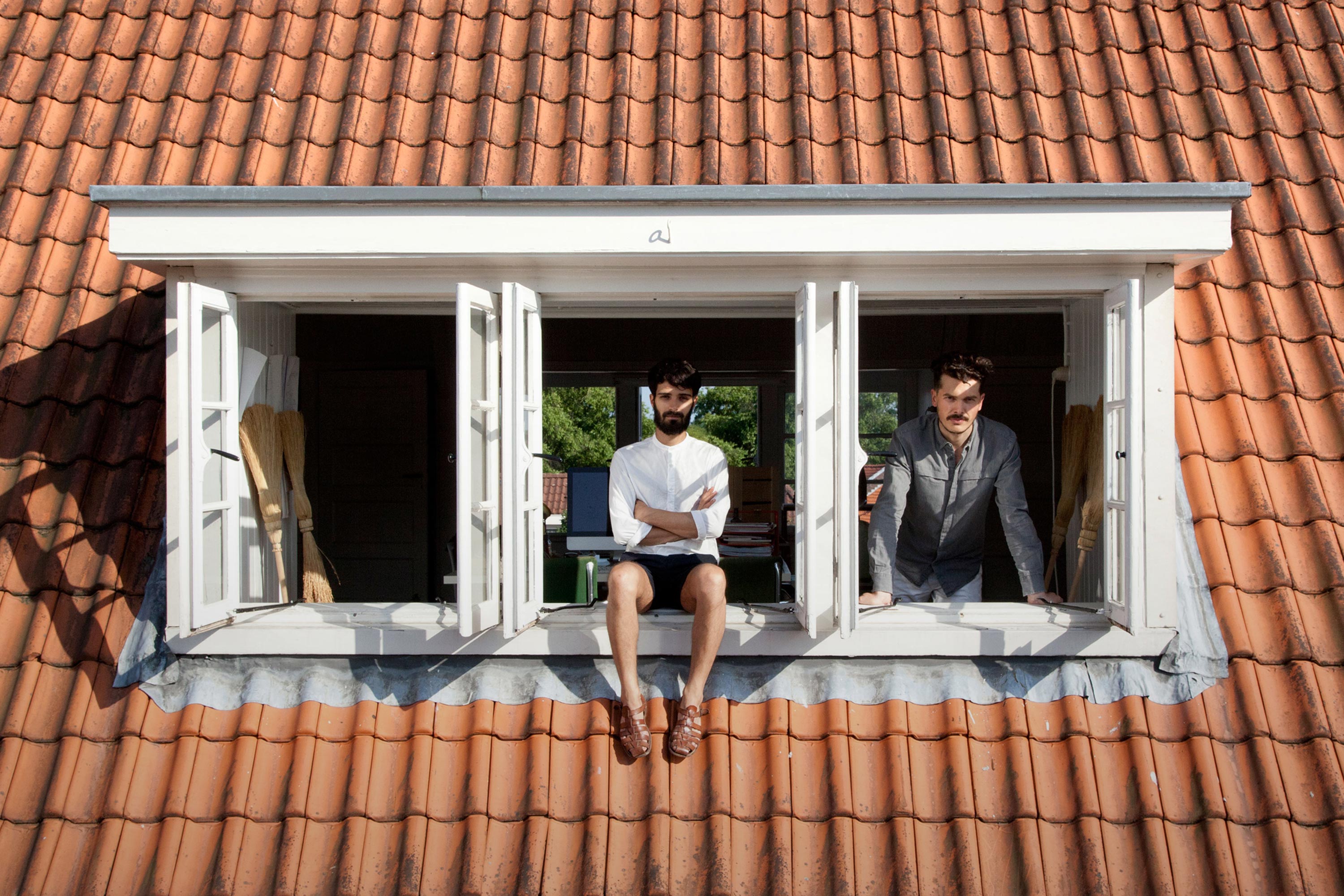